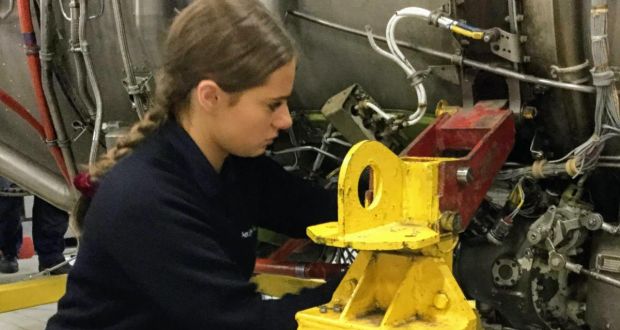 Ellen Cummins: “I was fascinated by how everything worked in the cockpit so I applied for the apprenticeship and joined the programme last September.”

Ellen Cummins got her first taste of engineering in transition year at school. Students at St Peter’s College in Dunboyne, Co Meath, could sample all the Leaving Cert subjects on offer and Cummins took to engineering like a duck to water.

She subsequently sat the subject for Leaving Cert and achieved an A2 on the higher-level paper. Her plan was to go to college to study engineering but at just 19 years old, she thought she’d build up some life experience first.

An accomplished Irish dancer, she began by working for a company designing Irish dance dresses and, at 22, she applied for the Aer Lingus Maintenance & Engineering Apprenticeship Programme having spent the previous 18 months as cabin crew with the airline.

“I was fascinated by how everything worked in the cockpit so I applied for the apprenticeship and joined the programme last September. I’m now on Phase 2 and based at the Shannon Aviation Maintenance School,” Cummins says. “It’s not something to take on lightly as there is a lot of study involved and you need to be very self-disciplined.

“Being away from home has allowed me to focus and I’ve been consistently scoring in the 90s in my exams. Some of the modules are particularly voluminous and complex but there are a lot of resources available and the instructors are very encouraging and explain everything in great detail.”

Cummins says the selection process for the four-year programme was very straightforward.

“The initial stage was an online application and CV. The next stage was a series of online aptitude tests and a short video interview and this was followed by a manual dexterity test and face-to-face interview,” she says. “Girls are in the minority here but there are six of us compared with two the year before.

“From what I see there is absolutely no difference between boys and girls when it comes to ability in this area.”

The apprenticeship is run in conjunction with Solas (the statutory body with responsibility for the management of the national apprenticeship system in Ireland) and consists of seven phases of class room and on the job training. Apprentices work primarily on line maintenance and they get paid. However, the level of remuneration for this apprenticeship and others is a matter for the individual employer.

Applications for the 10 places on the 2019 Aer Lingus programme will close on May 8th. Over the last eight years, Aer Lingus has put 66 apprentices through the course and, by year four, the majority will be earning around €30,000 with the opportunity to more than double that within a few years of qualifying.

Those who go through this training don’t necessarily stay in maintenance. They also move into other areas, such as aircraft leasing, where salaries can be even higher.

Generation Apprenticeship, which is a major expansion project to more than double the number taking the apprenticeship route, is part of the 2016-2020 national action plan.

“In Ireland, apprenticeship is already a first choice for over 15,000 people of all ages and backgrounds, career changers as well as school leavers,” says Dr Mary-Liz Trant, executive director for skills development at Solas.

“Apprenticeship is also meeting the needs of new and modern types of jobs, such as data analyst, aviation engineer and software developer,” she says. “Highly paid roles across insurance, logistics, auctioneering and international financial services are just a few of the new careers accessible through apprenticeship.”

Nissan Ireland launched the Nissan Apprentice Academy in 2015 to develop the “technicians of tomorrow”. Jobs in the Nissan Ireland dealer network are offered to those who complete the apprenticeship successfully and the top performing student will be awarded a third level scholarship to attend the automotive school at DIT. The top performer also gets the use of a new car (taxed and insured) for a year.

Nissan says it’s looking for those with enthusiasm, common sense and a strong work ethic for its scheme, which is run in conjunction with the Solas Motor Apprenticeship programme. Applications for the 2019 intake are open.

The Society of the Irish Motor Industry says its member companies have committed to recruiting 150 apprentices this year.

While applications for this year’s apprenticeships with ESB Networks are closed, there will be further opportunities at the company which is running an initiative that will see it take on almost 400 apprentices up to 2020.

The ESB has a long tradition of “growing its own” and its highly-regarded programme is a mix of on-the-job experience and classroom based learning. Apprentices work towards a QQI Advanced Level 6 Electrical Trade Certificate over a four-year period.

- Industry-led by consortiums of industry and education partners

- Between two and four years in duration

- Apprentices are employed under a formal contract of apprenticeship