Allow yourself to embrace ‘Jomo’ – the joy of missing out 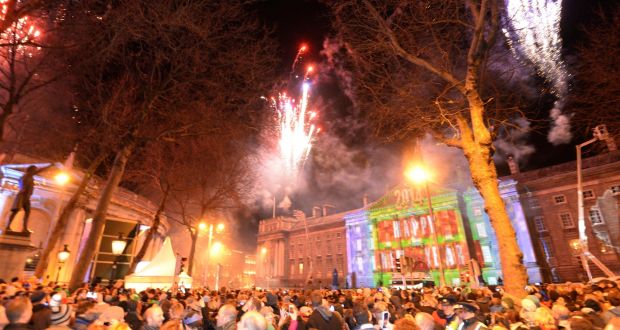 New Year’s Eve in Dublin. Colleagues in the FT office on New Year’s Day this year were competing not about how late they stayed out the night before but about who managed to get to bed before 10pm. File photograph: Dara Mac Dónaill

Clearly none of us is getting any younger. But it still seemed remarkable that colleagues in the FT office on New Year’s Day were competing not about how late they stayed out the night before, nor about the wildness of the parties, but about who managed to get to bed before 10pm.

What bliss to have already passed out, face crushed between the pages of a good book, as others were traipsing from venue to venue in search of increasingly outlandish things to drink.

The book I chose to dribble on was titled, appropriately, The Joy of Missing Out. This slim volume by the Danish psychology professor Svend Brinkmann, published next month, is designed to liberate us from overstimulated modern lives through the old fashioned ideas of restraint and moderation.

“Opting out and saying no”, he writes, are skills we lack “both as individuals and as a society” – not least because of the huge social experiment of tech-enabled connection (and therefore comparison with others) and mass consumption.

Prof Brinkmann points out that because the prevailing mood is that “we must all rush around seizing the day”, the Latin motto carpe diem is now one of the most popular tattoos. I don’t need the image of branded skin to buy into his theory that the world is being driven bonkers at speed because it suits “the man” to sell us stuff.

Someone recently told me that advertisers and online content providers use the phrase “share of thumb” to describe the competition for your attention as you tap on a smartphone. It has been in my head ever since and I’m ready to resist.

So just as I was getting ready to see in the new year under the duvet, I called Patrick McGinnis, an entrepreneur and investor credited with inventing the acronym Fomo (fear of missing out) in 2004 while at Harvard Business School. A small-town boy from Maine, he describes being transplanted from “a very calm place with a simple lifestyle to a hub of 1,800 highly ambitious, connected young people”.

It was, he explains, like living inside a social network before they were invented – he went overboard, trying to do everything and be everywhere. He named this mania in a satirical piece about life at HBS, but believes the Fomo syndrome is becoming near-universal and has roots in human nature: think of Eve and the apple in the Garden of Eden as a moment of Fomo. The working title of the book he is writing – Fomo Sapiens, based on his business podcasts – says it all.

His tips seem pretty sensible from someone who admits to scheduling five things in one night: he is “still working on my perfect ‘no’”. The tendency to overcommit is down, he says, not just to Fomo but Fobo (fear of better options). The familiar paralysis – should you go to that work or social event or skip it? – disappears, he advises, if you refuse to see this as an important decision.

Flip a coin, at least mentally, because: “You know what? It doesn’t really matter.”

Removing tech distractions is also useful to cut down on option overload. This should not be in order to max out on some other experience – consider the unappealing New York Times article last week suggesting that giving up your smartphone for a year would free you up to have sex 16,000 times.

No, our neurotic hyperactivity is worth pondering in terms of who we are becoming – marketing cannon fodder – as well as how badly it can scatter our attention. To put it less politely than Mr McGinnis, giving in to Fomo makes you a schmuck. He calls it “taking your cues from someone else”.

Prof Brinkmann points out that less delivers more in terms of meaning: “If we want to be friends with everyone, we cannot truly have a friend. If we want to do something well, we cannot do it all.”

Fighting off Fomo and Fobo, learning to embrace limitation and self-imposed boundaries, takes courage because our environment offers constant temptation – and who doesn’t want to think of themselves as brave?

So if you are burdened with maximalist expectations, first be comforted that the malady is as common as a back-to-work virus. Then realise that new year self-flagellation involving resolutions to achieve more are beside the point. Bite your thumb at the hordes fighting for your attention and spend it on something that matters.