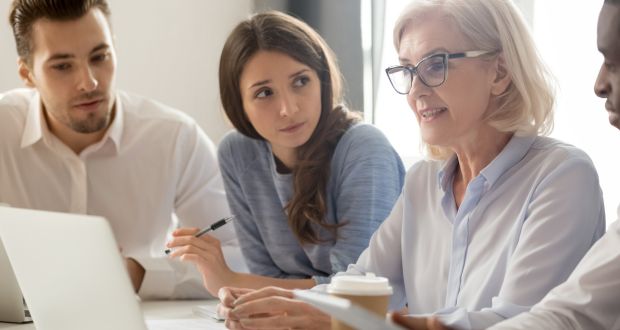 An intergenerational workforce can be a potent force for success. Photograph: iStock

Successful boutique hotelier Chip Conley joined Airbnb in 2013 at the request of one of the company’s millennial co-founders Brian Chesky. There’s nothing unusual about an entrepreneur spotting good talent and wanting to have it. What was different on this occasion was that Conley, at 52, was roughly twice the age of the precocious newbies intent on disrupting the traditional model of guest accommodation.

Chesky hired Conley because he wanted a mentor. He also believed his fledgling company would benefit from Conley’s industry expertise. But sitting in his first meeting with a group of young engineers, Conley wasn’t so sure. He says he slid down in his chair and did his best to become invisible as most of the conversation went over his head. Suddenly his 26 years of hospitality experience looked redundant in this brave new world of home-sharing where knowing how many rooms a chambermaid could clean in an hour was irrelevant.

Conley felt like a fish out of water in the Airbnb environment, but something kept him glued to his seat. As his curiosity about the company’s evolving business was piqued, his desire to run for the hills receded and he began to see he had something valuable to offer to these young trailblazers.

On joining Airbnb, he had been assigned a working “partner” in her 20s who was already a manager at the company. Laura Hughes was completely at home in the techstart culture where accountability and metrics rule the roost. But, although she was excellent at delivering on these criteria, Conley saw the need for a complementary skillset that took account of the fact that business is first and foremost H2H (human to human) before it’s B2B or B2C.

Interestingly enough, Hughes quickly recognised this from working with him. On the one hand she was his mentor as he struggled to negotiate the unfamiliar landscape of a techstart, but then he became hers as she realised the depth of his process knowledge, his ability to get things done and his skill at articulating a vision and bringing a team with him to achieve it. Central to his success was accumulated wisdom that meant he understood what motivates people and was savvy about how organisations really operate.

Fast forward five years and Conley has become a powerful advocate for the intergenerational workforce. He believes each group adds a layer of value and that combining them to create “a pipeline of intergenerational wisdom” could create a congruence that puts the EQ (emotional intelligence) of older people and the DQ (digital intelligence) of younger people together to create “a powerful alchemy”.

What’s stopping us, he believes, is that generations often operate in isolation and don’t trust each other enough to share wisdom in both directions.

Also slowing progress is the fact that so few companies are harnessing the potential of intergenerational workforces. Fewer than 10 per cent of companies in the US with a diversity and inclusion programme put age diversity into the mix, Conley says.

Conley, who has condensed his thinking into Wisdom at Work: The Making of a Modern Elder, points out that many people already have a boss who is younger than they are and that power is cascading downwards ever faster because of the growing reliance on digital technologies.

The hitch with this devolution is that it comes with an expectation that these young digital leaders are somehow pre-loaded with the relationship wisdom and management skills it has taken older workers decades to accumulate. In short, they are not and there is an experience vacuum.

Tony Devine, director of the Irish-based Grey Matters Network which promotes the experience and skills of older workers, says the dialogue around intergenerational workforces needs to change.

“The current conversation pits the generations against the other and is loaded towards the negative reasons why this issue needs our attention – avoiding a pensions time bomb or keeping people healthier to reduce the cost of healthcare to the State,” he says. “We should be emphasising the value not least because there is strong evidence that employees in multi-generational teams are on average 10 per cent happier at work.

“There are the obvious pluses to hiring someone older, such as the commitment and stability that goes with the ‘been there, done that’ of the mature worker, but we have to move beyond this”, Devine adds. “Organisations are missing out by not reaping the benefits of the diverse perspectives each generation brings to decision-making and execution.”

Ireland still lags the leaders in terms of labour force participation by older people. We are currently at 62.5 per cent while the UK is at 79 per cent and the Scandinavian countries all have participation of over 70 per cent. However, it seems Irish companies are slowly waking up to this under-tapped labour resource.

Grey Matters has a healthy list of “prospects” on its books for roles in sales, business development, research, HR, pensions, hospitality, coaching and financial services. It has also recently been approached by an organisation looking for mature workers for customer-facing positions because its customer base is 50-plus and it wants their queries to be handled by staff with similar life experience.

To ramp up the conversation about age diversity further, Devine’s company is also the driving force behind the inaugural national intergenerational workplace day which takes place on November 7th.

Published in The Irish Times.