A simple ‘thank you’ goes a long way in work

A simple ‘thank you’ goes a long way in work

Never underestimate the motivating power of gratitude in the workplace 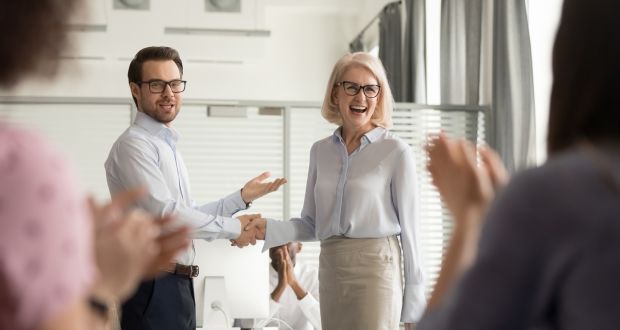 Showing gratitude is important for multiple reasons, yet it’s something managers and organisations are not good at. Photograph: iStock

Work and organisational psychology are key interests of Italian academic Annamaria Di Fabio, who teaches at the Department of Education and Psychology at the University of Florence. One of topics she has studied in some detail is gratitude in organisations. This is now thought to be “crucial to employees’ efficiency, success, and productivity”, not least because it promotes positive relationships at work while lowering negative emotions in the workplace and enhancing organisational health and success.

From the time children are small, parents put a lot of effort into teaching them to say thanks, yet the practice seems to go out the window at work. Showing gratitude is important for multiple reasons, yet it’s something managers and organisations are not good at as any group of employees will tell you pretty quickly.

Large festive gatherings are not to everyone’s taste. However, if you’re interested in a microcosm of the world of work they’re a handy source of intergenerational research and somewhere to float theories – about the importance of workplace gratitude, for example – when the mulled wine has people in a mellow mood.

What emerged from various conversations with newbies who’ve just started work right up to the 60-somethings who are coming to the end of it, was that most organisations needed to make a much bigger effort to show gratitude. People weren’t looking for their name in lights or fat bonuses for doing their job – far from it in fact. They just wanted a level of recognition that indicated their efforts were not being taken for granted.

Showing gratitude works because at its simplest, humans need to be appreciated

Appreciation is thin on the ground in many workplaces. Leaders don’t give credit where it’s due and seem to think that a pat on the back at the annual performance review will suffice.

This grudging attitude to praise giving creates an environment shot through with dissatisfaction where employees are disillusioned, disengaged and won’t go the extra mile for anyone. By contrast, showing gratitude has a really positive impact on motivation and workplace culture. It can contribute to improved productivity and staff retention and make people happier and more creative.

Showing gratitude works because at its simplest, humans need to be appreciated.

If there is any doubt about the importance of workplace gratitude, look no further than the success of the Irish-American software company, Globoforce. It has become a significant player in the international recognition industry with more than four million employees in more than 150 countries using its recognition programmes.

“We’re in the ‘thank you’ business,” explains its co-founder Eric Mosley. “We help companies to give recognition and to express gratitude to employees. Both the giver and the receiver are enriched and ‘lifted’ by the process and this in turn generates a positive, can do, working environment.”

For the newly minted employees in the gathering, their big obsession was with finding a job that challenged them. They were keen to progress and wanted employers to plug the gaps emerging in their skillsets with suitable training “now” not in a year’s time.

Was praise/gratitude important to them? Of course, they said. It shows you’re valued even if you’re only a junior member of the team. Would they job hop if they were not getting it? Yes, absolutely.

With a number of working years now behind them, it was the younger millennials who noted that their organisations seriously underrated gratitude as a motivational strategy. They were also quick to identify trust as an important workplace issue, especially where companies are saying one thing to attract talent but doing another.

Specifically this related to promises made and not honoured around promotion, training, career development and working conditions. For example, introducing flexi time or working a day from home but then making it impossible for people to do so.

There was also considerable resentment about how jobs were described on recruitment sites and at interviews versus how they panned out in reality.

In her study, Gratitude in Organisations: A Contribution for Healthy Organisational Contexts, Prof Di Fabio says that, while the full impact of corporate gratitude has yet to be fully studied, it undoubtedly plays a fundamental role in organisational success by reducing toxic emotions such as rancour and envy while increasing psychological safety for employees. This in turn encourages ideas sharing and risk-taking.

“It is also important to employee efficiency, success, productivity, and loyalty and gratitude thus appears to be a precious resource that sustains performance,” she says.

On a slightly different note, anyone facing retirement with some trepidation in 2020 should be heartened by the fact that the happiest group in the room by far at this gathering were the recently retired, all of whom had had full-on careers for the best part of 40 years.

Asked if they missed work, the unanimous answer was no. They were relishing the fact that life no longer included red-eye flights and a daily commute in hellish traffic. Since retiring they had begun picking up the threads of old hobbies and redefining their lives by something other than work. One had walked the Camino, another was mentoring startups, a third had gone back to college to add an arts degree to a string of business qualifications.

They all admitted to being apprehensive before taking the plunge, but having tested the waters of active retirement their advice to anyone thinking of following suit in 2020 is to go for it if it’s at all financially possible.