Dear, oh dear: How not to start an email 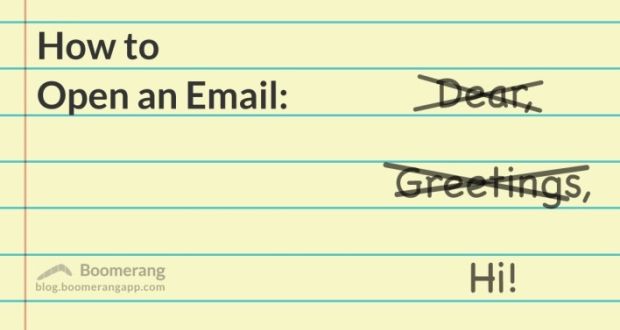 The three most common greetings for opening emails are “hi”, “hello”, and “dear”, according to Boomerang, the email plug-in software for scheduling your Gmail and Outlook correspondence. Based upon a dataset of more than 300,000 email threads, they looked at response rates to emails based on their greetings and it was found that the informal “hey” performed best: the response rate was 64 per cent.

In comparison, those greeting recipients with “hello” and “hi” got an average response rate of 63.6 and 62.7 per cent respectively. And, oh dear, “dear” did not fare so well with a 56.7 per cent response rate. The take home message might seem to be that we should all switch to casually slinging our emails with a holler of “hey” but that does not seem like the right tone for your boss or a potential client.

Data, as always, tell us part of the story; perhaps the informal greetings indicates a friendship or similar, which would explain why they answer your emails more readily than people you don’t know. Either way, Boomerang says that in terms of response rate any kind of greeting is better than none so don’t just dive into the conversation. Besides which, it’s rude.