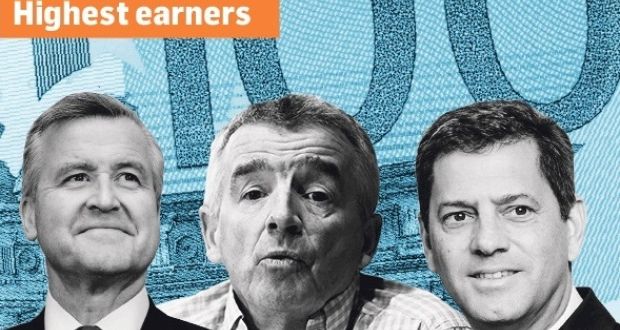 The bosses of Ireland’s top 20 companies earned 41 times more than their employees, widening the gap on the previous year as they secured a collective pay rise of 13 per cent, research from The Irish Times has found.

Data compiled from the annual reports of the Iseq 20 constituents found that the average compensation for a chief executive rose from €1.6 million to €1.87 million for their latest financial years.

That contrasts sharply with the fortunes of employees who secured a pay rise of just 1.5 per cent to bring their average to €45,316.

As was the case last year, the chief executive of CRH, the building materials giant, was the highest earner. Albert Manifold took home a compensation package of €8.23 million, an almost 5 per cent drop on the previous year.

CRH employed the highest number of staff in the period, with a headcount of 89,831 who commanded an average wage of €47,032.

​And while the salaries of CRH employees was slightly above the average, the data shows that housebuilders were the companies that paid the most to their staff. Staff in Glenveagh Properties took home an average salary of €84,990 while the 146 employees in Cairn Homes earned an average of €68,369. The listed real estate investment trusts were higher paying again, although that reflects the reduced number of staff they directly employee. Hibernia Reit, for example, paid its 33 employees an average salary of €159,090.

The company that paid the lowest average salary was, again, Dalata Hotel Group which paid an average of €28,137 to its employees.

Dalata’s chief executive, Pat McCann, meanwhile took a more than 14 per cent cut in his compensation package to €1.5 million making him the third biggest percentage loser in this survey, behind Irish Continental Group chief executive Eamonn Rothwell who took a 22 per cent salary cut to €2.15 million.

The biggest percentage loser was Flutter Entertainment boss Peter Jackson whose compensation package of £1.66 million (€1.81 million) was a whole 48 per cent behind that of his predecessor.

The biggest percentage gainers, meanwhile, were primarily exceptional cases. Justin Bickle, Glenveagh’s boss, took home a 540 per cent rise in his package to €719,500, although that reflects the fact that he didn’t work for a full year with Glenveagh the previous year. Similarly, Margaret Sweeney’s 435 per cent pay rise, for her role as the chief executive of IRES Reit is due to the fact she succeeded David Ehrlich on November 1st, 2017. Francesca McDonagh, the boss of Bank of Ireland, saw her pay rise 289 per cent to €958,000 but, again, that’s due to the fact she took up her role in October 2017.

Female representation was improved during the year, with three Iseq 20 bosses being women including Ms McDonagh, Ms Sweeney and Siobhán Talbot, the chief executive of Glanbia who secured a 20 pay rise to €2.3 million during the period.

In total, the Iseq 20 companies employed 255,108 staff, up from 246,431 a year previously. They collectively paid more than €11.5 billion in wages to their staff. The same companies paid some €35.6 million to their chief executives.